We spent the majority of our vacation just visiting with family.   We went to church on Sunday; then two of my nieces came over to visit for a little while.  On Monday, the kids and I drove (in the rain again) down to Homosassa Springs where Todd’s parents and sister were staying at his aunt and uncle’s house. We had an early Christmas and the kids got to open their gifts. They enjoyed playing and spending time with their grandparents, although I think Maggie was a bit disappointed that it was too cold to swim. We spent the night there and drove (in the rain again) back to my parents’ house the next afternoon. 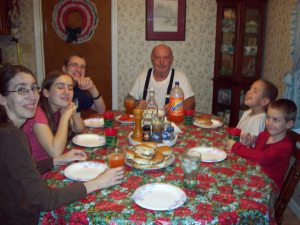 Wednesday night Dad and I drove to the airport in Jacksonville to pick up Todd. (I wasn’t driving so this isn’t included in the 2600 miles, and yes, it rained at least part of the way.) It was so good to see him. Even though I talked to him every day while we were gone, it just isn’t the same when we’re not together. 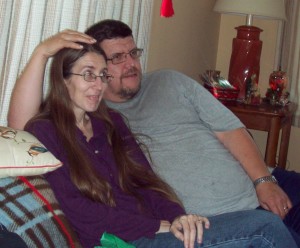 Christmas Day was pretty laid back. We got up and ate breakfast and opened presents. That afternoon my older sister and her family came over and opened their presents from my parents and vice versa. (They do that every Christmas.) Todd’s parents and sister also came up from Homosassa.

On Friday Todd’s parents and sister came over one last time before they headed back home to North Carolina. And that evening my younger sister and her family came up from south Florida. This was the first time I had met her husband and his daughters, as they just got married earlier this year.

Then on Saturday everyone from my side of the family was there and we had Christmas part three with my younger sister’s family. It was kind of crazy with nineteen people there, but it was a lot of fun and we took pictures of the whole family together.

The next Wednesday morning we went to the Butterfly Rainforest at the Florida Museum of Natural History. It was cold and rainy so the butterflies were not really flying around, but we were able to look at them really close up and Maggie loved seeing the birds that were in there with the butterflies. Matthew was not impressed with the butterfly exhibit, but enjoyed the rest of the museum. Mom and I took a break with Mark and Micah in the kids’ Discovery Room while Dad took Matthew and Maggie through the natural history exhibits.  Wednesday night we celebrated Mark’s ninth birthday. 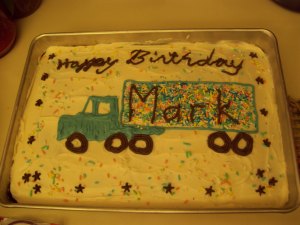 The rest of the time we mostly just relaxed, played games, and explored Mema and Papa’s yard (they have five acres, so there was a lot of exploring).  And most of all enjoyed the spending time with family. 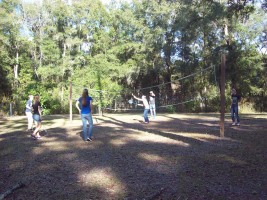 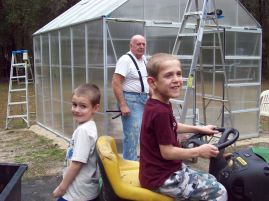 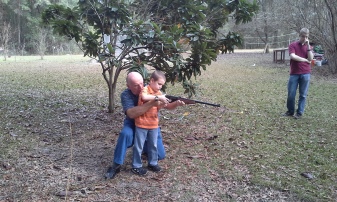 One thought on “2600 miles, part two: Three Christmases and a birthday”